Accueil » In English » The slut walk in London or the incitement to rape and to pedophilia.

The slut walk in London or the incitement to rape and to pedophilia.

I also want the women to dress modestly,

with decency and propriety, adorning themselves,

not with elaborate hairstyles or gold or pearls or expensive clothes,

10 but with good deeds, appropriate for women

who profess to worship God.

They call themselves sluts … all is said.

It doesn’t happen by chance, this movement would come from Canada, where the worst feminisms is raging. Today, we should assume ourself all of our desires, to not fall into perversion. The rules and the law would cause disorder. uninhibited from all, guilt-free, we would have all rights. Men should keep quiet! 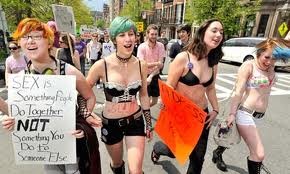 But the world can not function like this. Rules and social laws are intended to limit violence between individuals, to take care all of us. Each time we want to ignore this rule, each time we do not know that there are people with different motivations on this planet (you know that men exist ?), more great disorders are caused than those that we believed prevent. Such is the case right now concerning women’s clothing in the West. As men, we do not have to accept the vulgarity of women’s clothes who would be totally naked in the streets because « their bodies would belong to them. »  In the name of this dogma, feminists have already committed the worst crimes of humanity: the holocaust of abortion on the altar of our materialism. In the name of this dogma, they have reduced social relations to a hyper-sexualization, to complain themselves later being victims of sexual harassment. Now they want to dress as they wish, always because « their bodies belong to them ». But let us look a little closer to this attitude.

In everyday language, it is accepted that we are not allowed to say anything : you can’t insult someone, defame, to lay false accusations, and it is morally wrong to lie for personal reasons, to lower a particular individual, to propagate rumors and slanders.

As our language, our body has a special language that regulates social relations, that ritualizes them, to contain many forms of violence. A woman who dresses like a slut sends several messages (and I do not mean what she think to send but what she really sends)

_ My body belongs to all who look at me. Yes, contrary to what say those who dress anyhow, when someone let see private parts of his intimacy, he’s abandoned, in part, the ownership of his body. What would be said about a celebrity who would communicate in the newspapers on his privacy by saying « you do not have the right to read these newspapers because of my privacy » He would be accused of hypocrisy. Though she can think, the message of a slut is explicit: « I let you see what you are entitled to see, » and in this case you have the right to see everything almost. The bodies of women who send us such a message, belong to us in sight.

_ Fuck me. Why a woman who would want that anyone see her naked, would not want to go further in this « gift » for all. She sends the message: « I am free for all, you can get closer », If a woman tries to seduce, the natural consequence is that we attempt to seduce her? No? Except to believe that the body does not speak, that there is no message in clothing, that what is inside does not match the outside. In this case, we would be dealing with crazy. This is why, she probably says :

_ Fuck you.I am beautiful, I’m young, I have all rights, I exert my power over the poor sexual objects that you are, male. This kind of attitude tends to maintain a stranglehold on men by the sexualization of all the social relations: a woman who let herself go to excite a man, to get what she wants is by definition a whore: she acquires a power in exchange for another. She excites men who want to satisfy their natural inclinations, who want to get easy affection. Now, they close this free access to sexuality by saying later that this was not what they wanted, their desire to be filled with tenderness was not this one (what is sometimes very false). The legal right to play with men (and again, indecent exposure exists), is by no means a moral right.

But the worst is to follow. Little girls want to be like their mothers, and away to prevent them, they are pushed to emulate the sexualization of their elders:

Imagine a pedophile who finds himself face to face in the street in front of his greatest fantasy: a little girl who would have the same sexuality as an adult …

we confront the children to perverts, we excite their perversions by exempting them in the same time. I argue here that this kind of bitches that walk naked down the street and who dress their daughters in the same way, obviously in the name of freedom of girls to own their own bodies, are supporters of pedophiles. They maintain their fantasies, and support the weaknesses of which they are complicit.

HEY! WE ARE NOT IN THE WORLD OF MY DEAR TEDDY BEAR!

You, feminists, you are full of faults, and you would require men what you are unable to become? You are also the first to condemn exhibitionists, bunch of hypocrites! If we are not capable to be perfect, at least, do not excite our common weaknesses  and I think that everything will be fine in a brave new world. The exhibitionism is not better when it comes from women than when it comes from men…

Always in seeing by them, feminists say they have a duty to assume their bodies. But those who assume their body in undressing are not the same as those who are struggling to assume, for the simple reason that a woman who is struggling to assume his body is unable to behave like that. Those who make of the provocation in the street, assume their body very well, and play with it. Sometimes, they are victim of incest and they want to regain confidence in maintaining a domination they have as well over men. But by behaving themselves as such, they encourage deviant behaviors wich they have had to suffer indirectly the disorders, and this is the proof that they must go for treatment. A woman who really assumes his body do not need to behave like a slut.

Cultivate the moderation couldn’t hurt us in the West.

However, there are ways of protests, legal ways to fight against this kind of attitude. If a woman pisses you off , and at the same time, if you’re lucky that she dresses like a slut, then you can prosecute her for indecent exposure, and you will do two things at once. You will reduce its claims, and you will punish an exhibitionist.